Where you can find me:

Hello Everyone! 🙂
Today one of you wrote me and asked my opinion about Sodium Polyacrilate.
Many thanks to him for making me realize that I had never written an update about this ingredient and a lot of time has passed since that happy post!
[Click HERE to read the old post] 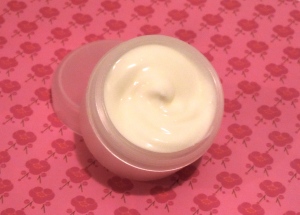 I am glad I tried to make that cream because it helped me understand this ingredient better: it is a good practice to try to push an ingredient and see how much it can do on its own and, specially with emulsifiers, it is a good idea to try to see how they behave in “simple as possible” formulations. So here is all the full story of how my relationship with sodium polyacrilate has developed: 🙂

The cream of this post actually separated after a couple of months.
It was a weird kind of separation because some oil would get to the surface but the cream would still look “beautiful” and, if mixed again, it would LOOK stable again – at least for a couple of weeks – but, obviously, it would separate eventually. I wrote “look stable”  because clearly it wasn’t.
The supplier from whom I had purchased this ingredient had suggested its use as lone emulsifier and stated that Sodium Polyactilate could support up to 25% oils. Well, now I know better: it is not stable with up to 25% oils (I have tried making a cream with 20% oils and it was even less stable than this formulation, no surprise there 🙂 ).
Most of the resellers now do not suggest to use this ingredient alone and it is sold mostly as a “support” of some other emulsifier. I also haven’t found anyone saying that it would support up to 25% Oil Phase anymore (probably 5% – 10% maximum is more likely).

There is one big mystery though about HOW ON EARTH this cream could possibly be so good looking and firm even with that 2% D-Panthenol (and let’s add that protein as well)!
Sodium Polyacrilate, in fact, has ever since COLLAPSED in most of my other attempts if I only dared to add the smallest amount of electrolytes! And by “collapsed” I mean that from a firm-silky cream it totally liquefied leaving me with a watery waste of ingredients! 😉
I guess this ingredient blessed me with the beginner’s luck 😀 (and then kicked me in the teeth soon after! 😀 Ahaaa!).

Now, a side note about the “feel” of the cream: the feel at the touch was definitely “silky” and “smooth” and it would absorb rather quickly but there was something I didn’t quite appreciate of it: the cream would feel quite “empty”, as opposed to “rich” and “moisturizing”.
I know these are all words that can mean totally different things to each one of us, but I know no better way to describe it!
Well I remember actually a commercial cream from a famous brand that was meant for teenage girls (therefore, a skin that doesn’t require a lot of moisturizing) and the commercial was all about “fresh” and “water”. This cream had that same feel so this might be an interesting ingredient for such kind of product.

I am happy I finally wrote this update… it was definitely needed! 🙂

This work is licensed under a Creative Commons Attribution-NonCommercial-NoDerivatives 4.0 International License.